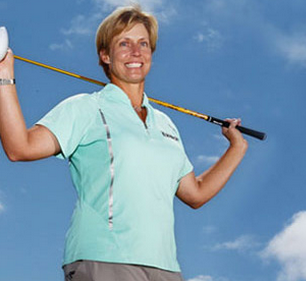 When it comes to athletic performance... particularly in a sport like golf... an ample amount of good quality sleep is an essential element. Because concentration, coordination, focus and energy are dependent on the regular acquisition of adequate Zs.

That's what makes professional golfer, Nicole Jeray's story so extraordinary.  The naturally athletic Illinois native began playing golf at age 11. She quickly excelled at the sport and it wasn't long before she was being encouraged to aim for a professional golf career.

"I had a lot of success on my way to becoming a professional player on the LPGA in 1994. I won the 1990 Ohio Girls Invitational and was a semifinalist at the 1991-1992 U.S. Women’s Amateur Public Links Championships. I also won eight titles while playing collegiate golf at Northern Illinois University (NIU) and won the MVP award from 1989-1992. In 1998, NIU inducted me in the University Hall of Fame. I was the youngest person ever to be inducted"

The thing is, as Nicole was enjoying her substantial on-course successes she was also experiencing some disconcerting physical symptoms.  Many of them were, sleep-related... things we can all relate to to some extent... daytime sleepiness, interrupted sleep and a kind of chronic exhaustion. At the time, the physicians Nicole saw chalked her complaints up to "being a typical college student; burning the candle at both ends and never getting enough rest".  As time went on however, Nicole's symptoms became more extreme; she began to experience sleep paralysis and hypnagogic hallucinations. Cataplexy, a temporary muscle paralysis triggered by strong emotions, kicked in as well. It was only after the aspiring professional golfer connected with a sleep specialist and underwent some specialized studies that a definitive diagnosis was reached, a diagnosis that would become a huge part of her life.  Nicole had a classic, text-book case of Narcolepsy, the chronic neurological disorder involving loss of the brain's ability to regulate sleep-wake cycles normally.

Last week was National Sleep Awareness Week.  On Friday, as we prepared to set our clocks forward for daylight savings time, I had the opportunity to talk to Nicole about Narcolepsy and about how it's affected her health, her golf career and her outlook on life.  Nicole is an inspiring and entertaining speaker and our conversation was fun and revealing.  Here are some of the highlights: -->


GGM: I read that it took several years of searching, and numerous different medical professionals, to arrive at  your diagnosis of Narcolepsy but once established, it turned out you were a "textbook case" . This would seem to indicate that even within the medical community there's a lack of awareness concerning Narcolepsy.  Why do you think that is, and what can be done to increase awareness.

NJ: Well hopefully with the awareness outreach we're doing it's changing but because the initial symptoms seem so similar to those experienced by anyone who works too much and sleeps too little, it's often overlooked.  Even after I developed cataplexy... when I'd get excited or emotional about something my muscles would suddenly get very week... there was still a general consensus that I just needed to take it a bit easier and get more rest. It was only my cataplexy became so severe I actually found myself falling to the ground, did my Dr. recommend a sleep specialist. At that point I was asked about my nighttime sleep, and when I mentioned my vivid dreams and sleep paralysis, the three elements were put together and I was told I had a textbook case of Narcolepsy.

GGM: Once your diagnosis was established, what were some of the changes you were required to make and how did they affect your life and career as a touring pro.

NJ: Well, once I had a definitive diagnosis my doctors helped me with medications, but where I really learned a lot was from the people I met in support groups and in the narcolepsy network. I got all kinds of information and tips on lifestyle changes I could make that would help me manage my symptoms; paying attention to what I'm eating, remembering to drink plenty of water and taking more frequent breaks when I'm working on a particularly intense project. All of those things helped me to not only manage my symptoms but also to practice a healthier lifestyle.

Also, I found out that the best way to keep my cataplexy under control and avoid the episodes of muscle weakness was to maintain an even keel... to stay balanced and calm, whether I was hitting a succession of birdies or just the opposite... and this discipline has definitely helped my golf game.

GGM: So many of us… from teenagers to senior citizens… experience sleep issues such as insomnia, daytime drowsiness and interrupted sleep. What are some of the warning signs that these issues could actually be symptoms of narcolepsy?

NJ: Well yes, everyone is tired but for people with narcolepsy it's way more extreme, and it really doesn't go away... this uncontrollable urge to fall asleep. Many people with narcolepsy experience cataplexy, vivid dreams and sleep paralysis... but not everyone does. The constant is a continual urge to fall asleep that interferes with daily tasks, and that's what should be watched for when there's a suspicion of narcolepsy.

For more information about Nicole, her golf career, her life and her Narcolepsy Advocacy fund raising campaign Swinging for Sleep, visit nicolejeray.com

For more on Narcolepsy, visit www.morethantired.com where you'll find detailed information on the condition including a symptom screener.